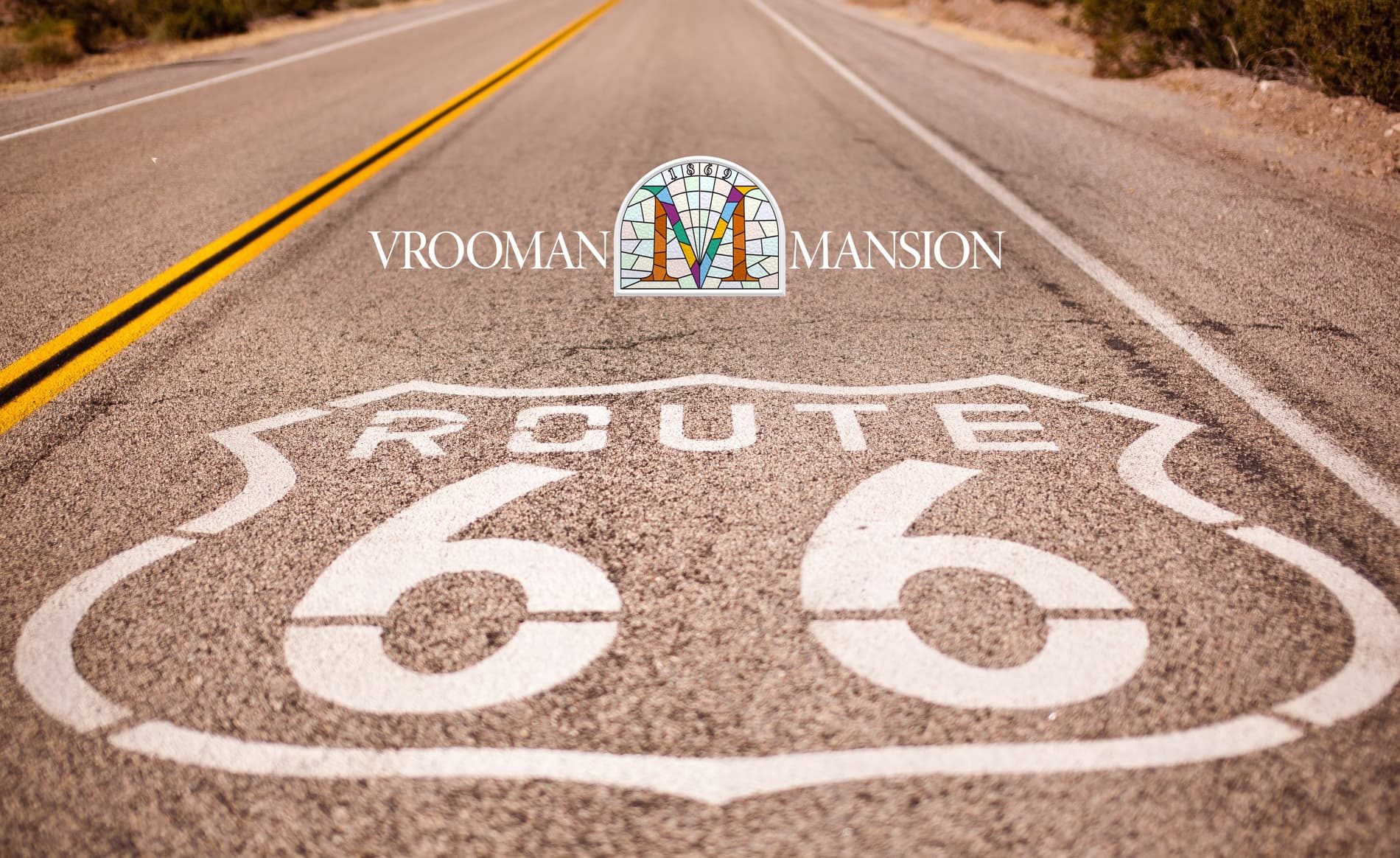 In 1903, two men and a dog made history. Their ragtag group was the first to drive an automobile across the United States.
We have H. Nelson Jackson, Sewall Crocker, and Bud to thank for the first American road trip.  Thirty-three years later, construction on Route 66 began. The Mother Road would eventually extend from Chicago to Los Angeles and change the face of American history along the way.
Are you planning a road trip this summer? If so, you’ll want to keep reading. We’ll highlight ten fun and quirky things to do and see on a Route 66 roadtrip as you cruise along the Illinois portion of this iconic highway.

Route 66 road tripping should start at the beginning, and that’s in the Windy City of Chicago. And since you’ll need a good breakfast to start your trip, why not try one of the oldest diners in the city?
Lou Mitchell’s opened in 1923 and is on West Jackson Boulevard, the official starting point of Route 66. Their menu is simple yet packed with diner favorites like omelets, pancakes, and piping hot coffee.
After breakfast, you can officially hit the road!

Joliet is only an hour from Chicago, but you may need a break to stretch your legs. Why not walk around the Joliet Iron and Steel Works site? When it opened in 1869, this steel mill was one of the largest in the country. Like many other industrial sites, it was abandoned in the 1980s.
Today it’s a park, and you can hike around the moody ruins of the smelters and other structures.
This is the perfect spot for photo buffs who like the juxtaposition of nature and crumbling buildings.

3. See the Gemini Giant in Wilmington

Route 66 is full of quirky oddities, but none are more strange or more familiar than the Muffler Men. Similar to Paul Bunyan statues, the Muffler Men wore painted costumes to advertise local businesses.
Not many of them are still intact except the Gemini Giant in Wilmington. He was dressed in a spacesuit to advertise the Launching Pad Drive-In, open since 1960. Snap a photo here since it’s one of the best Route 66 Instagram spots.
And grab a milkshake at the Launching Pad while you’re there.

Hop back in the car for a short drive down Route 66 to Dwight, Illinois. Here you’ll find one of the several restored gas stations that pop up along the route. But the real draw in Dwight is the bank.
Frank Lloyd Wright is arguably America’s most famous architect. He designed only two banks during his celebrated career, and one is in Dwight, Illinois. Wright designed the building for a local real estate magnate, and it opened in 1906.

Another 30 minutes down the road in Pontiac, Illinois, is the Route 66 Hall of Fame. No Route 66 road trip would be complete without a nod to the road’s history.
At the Route 66 Hall of Fame Museum, you’ll see photos from the route’s heyday, old road signs, and other pieces of Americana. On the second floor, you’ll learn more about Bob Waldmire, one of the Mother Road’s celebrated historians, and see his tricked-out bus.
Don’t miss the Route 66 mural behind the museum! It’s another Instagram-worthy photo spot.

6. Explore the History of Bloomington

If you’re a presidential history buff, you’ll love Bloomington, just 45 minutes from Pontiac. Here you can visit the David Davis Mansion. Davis was a US Supreme Court Justice from 1862 to 1877 and Abraham Lincoln’s campaign manager. The McLean County Museum of History is also a must-see and home to the Cruisin’ with Lincoln Route 66 Visitor’s Center where you can share a bench with Honest Abe for the perfect photo opp. 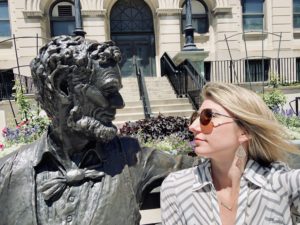 Bloomington is also the perfect place to book local lodging and spend the night. Though other mansions can only be toured, you can stay with us at Vrooman Mansion, Bloomington’s only bed and breakfast. We were built in 1869 and offers 7 gorgeous suites all furnished with period pieces, and have private bathrooms. Have a chat with our friendly staff to learn more about the history of the mansion and the Lincoln Oak. 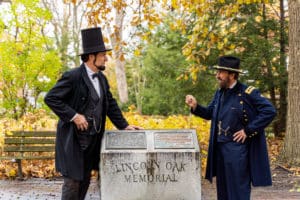 And while your breakfast might have started in Chicago for your roadtrip, after you rest and recharge here, enjoy our gourmet breakfast before hitting the road in the morning. If you have special dietary needs, just let us know and we’re happy to help! 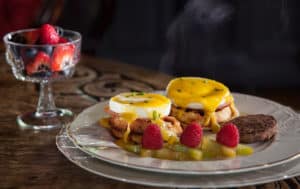 Our gourmet breakfast is included for all overnight guests

7. A Leisurely Morning in Lincoln

After a good night’s sleep, you’ll be ready to hit the road! Lincoln, Illinois, is your next stop. Abraham Lincoln was not born here, but he did open his law practice here, and the town was named for him in 1853.
Be sure to visit the Lincoln Heritage Museum to learn more about our 16th president’s life and political career. And since road trips are all about finding the unique and unexpected things along the way, you must visit the world’s largest covered wagon for another photo op.

Even though you just left Lincoln, you’re now heading to the city that celebrates him, Springfield, Illinois. Mr. Lincoln moved to Springfield from Kentucky and was a member of the state legislature and represented Illinois in congress before he became president in 1861. 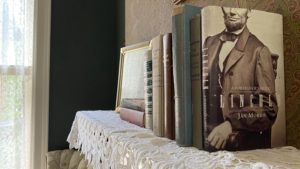 Be sure to visit Lincoln’s Tomb and Lincoln’s Receiving Vault, both significant historical sites. Outside of the tomb is a bronze replica of Mr. Lincoln’s head. Legend says if you rub his nose, you’ll have good luck (just bring some hand sanitizer, a lot of hands have touched that nose over the decades!).
To round out your President Lincoln experience, stop by the Proud Raven Totem Pole featuring a likeness of the president on the top.

9. Head Down to Staunton and Edwardsville

After Springfield, hit the road for the small towns of Staunton and Hamel. You’ll find a few classic and quirky roadside attractions in this area, so get ready to explore!
Start with Henry’s Rabbit Ranch in Staunton. Here you’ll find loads of Route 66 memorabilia, Volkswagen cars, and Rabbits! Snap some photos of the old-fashioned gas station and grab some souvenirs.
Edwardsville is the home of the Route 66 Festival, held every year in June.  Though you just missed the one for this year, start to plan for 2023! This is the perfect place for lunch. Check out either Teaspoons Cafe for sandwiches and coffee drinks, or Oliver’s Main Street Pub if you’re looking for a place with amazing burgers, unique pup food, and where you can pour your own beer from the tap!

10. St. Louis and the Gateway to the West

Congratulations! You’ve just completed the Illinois section of Route 66, and you’re crossing the Mississippi River into St. Louis, Missouri! Spend some time here visiting the Gateway Arch and enjoying some of their famous BBQ before you continue your journey.

Visit Us on Your Route 66 Roadtrip

Route 66 is an integral part of 20th-century American history. We at the Vrooman Mansion love to share our piece of the road with all of our guests. While you’re planning your Route 66 roadtrip, check availability and book today! We’d be honored to be a part of your journey, and help you make history of your own.